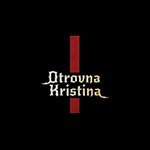 Otrovna Kristina is a new Croatian early 70s styled hard rock band singing in their own language. As far as I know, this is their first release and a bit of a surprise for Sulatron Records who are known for the ultra trippy/spacey/hypnotic releases. Having said that, I understand why Dave decided to put this album out since these guys know what they are doing and they do it well and with a tight, rocking touch. Too bad that this is exactly the kind of music that I'm pretty tired of, there are just too many bands in Scandinavia, U.K., main Europe & the U.S.A. playing this kind of stuff. But that's of course just my opinion, and not Otrovna Kristina's fault!

The album includes 10 relatively short songs. These guys can write great songs that vary enough and there is also some keyboards in there to give more dimensions, just listen to the more atmospheric track "Poljubi mme u trece oko". Most of the tracks are hard rocking and energetic, and we get lots of cool guitar solos which makes the songs more interesting for me at least. Sometimes Otrovna Kristina reminds me of  Josiah from the U.K. but mostly without the stoner vibe. "Lubav je bol" is a bit heavier and gloomier than the rest of the tracks and is not so strictly 70s in vibe. "Pita" is another a bit different track. The last track "Viking" gets closer to N.W.O.B.H.M. These guys are great musicians and the vocals are very good too, so if you can't get enough of early 70s styled hard rock check them out.