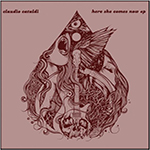 Claudio Cataldi is a singer/songwriter from Palermo, Cicily, Italy. He has released a couple of CD-R and tapes and taken part in a few Fruits de Mer compilations: A Momentary Lapse of Vinyl, Strange Fruit And Veg and two of the free CD-R's for The 13th Dream Of Dr Sardonicus' Festival August 7-9, 2015. His version of Syd Barrett number "She Took A Long Cold Look" also made it to vinyl on the highly limited Momentary Two 7" EP. This is his first 7" EP on his own, and a pretty good one it is too. First we get the Velvet Underground cover "Here She Comes Now" that's rather similar to the vibe of the original but even more minimal with no drums. Nice! You might have heard this before on the Strange Fruit And Veg compilation. Claudio's original composition "All My Friends Are Here" is a brand-new song not heard anywhere before. It's a nice, mellow and dreamy piece with soft vocals,  acoustic and electric guitar, and also some percussion. On the B side we have two older tracks, both also available on the The 13th Dream Of Dr Sardonicus' Festival August 7-9, 2015 compilations. "Final" is a moody, hypnotic psych pop gem also including some organ/keyboards. My favourite on the EP and it will also be included on my next Astral Visions psych mix! The instrumental "Ropes and Strings" is more acoustic in nature and rather folky but also very nice and atmospheric. All in all this is very pleasant little EP, check out this guy!