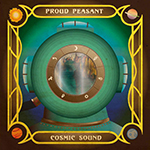 Proud Peasant is a totally new band to me but they are from the U.S.A. and clearly know their 70s prog rock. I really love the German progressive space rock band Eloy, and it's a real pleasure to hear Proud Peasant cover their track "Daybreak" that the band released in 1971 as a 7" single (I need to get that now too!). Proud Peasant have dropped the vocals altogether so we get a totally instrumental, faster, rather energetic and powerful version that works really well. I only wish it would last a lot longer then the 3+ minutes... Epic going. I can't say I'm such a big fan of Manfred Mann's Earth Band, but Proud Peasant's atmospheric, proggy and bluesy "Mercury, The Winged Messenger" cover sounds pretty cool. At around the three-minute-marker there is a weird, spacey and smooth part, and then the track starts to rock out more in a rather heavy and progressive way. Whoa! This is a great version and makes me want to investigate the original performer further too... All in all, this is a very nice instrumental prog rock single that the fans of this genre will enjoy for sure.