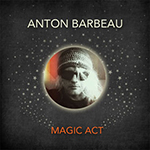 I first pumped into alternative/indie rock artist Anton Barbeau's music when his King of Missouri CD was released on Nick Saloman's (The Bevis Frond) Woronzow Records in 2002. The album featured also The Bevis Frond members Nick, Adrian Shaw (ex-Magic Muscle, ex-Hawkwind etc.) and Andy Ward (ex-Camel etc.), so it sure was something special and also has quite a lot of psychedelic overtones. Anton also sent me his 2006 album In The Village Of The Apple Sun for review, and that was another winner. At some point Anton moved from the U.S. to live and make music is Germany and U.K. He was also involved in a U.K. band called Three Minute Tease whose great psych pop/rock CD I have also reviewed. Lately, he has released some stuff on Fruits de Mer Records, like the 7" Psychedelic Mynde of Moses, that I really loved. Magic Act is his brand-new album and the first one to also be released on vinyl.

Magic Act was recorded all over Europe and U.K. and in addition to multi-instrumentalist-singer /all around musical genius Anton features 13 guest musicians. The CD includes 13 new (?) songs of very nice, melodic, harmonic, catchy indie pop/rock. Some of the songs are quite far from psychedelia, but luckily there is some psych elements left on several tracks. My favourites can be found in the middle of the album: the Beatlesque (and yes, rather psychelic!) "Black Lemon Sauce" and the excellent and trippy "Heavy Psychedelic Toilet", that for some unfathomable reason has been dropped from the vinyl version released in Spain on You Are Cosmos. You can hear the latter on my latest Astral Visions show. There are several other gems in there too of course, but more in the alternative/indie rock/pop vein. "City by the Sea" has some funky vibes. Some of the tracks also have some experimental vibes like programmed beats etc., but all are still rather accessible and not too hard to digest or enjoy. Beck fans might like this album a lot, for example. Ant really has ear for great melodies which is always a big plus, and also has a unique voice.There's a certain amount of humor in the cool lyrics too, and the album sort of cheers you up in a nice way, although it also has its melancholic moments. Everything is very well arranged and produced. Check this out!