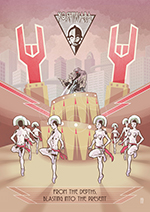 Yoshiwara (named after a famous red-light district in 17th century Edo, now Tokyo...or more likely after a nightclub in Fritz Lang's legendary 1927 movie Metropolis) is a brand new psychedelic rock etc.  magazine from Ireland. One of the three editors of Yoshiwara Collective is Danny Angus, who many of us know from his long-running Pariah Child label/psych-metal mail order/web site.

This first issue really is a labour of love for "proggy folk psychedelic drone space rock", and has taken quite a lot of time and effort to put together. It's quite small (A5) which makes it easy to take with you to keep good company on trips, but has 104 (!) pages, so someone could even call it a book. The covers are in full colour, the inside pages in black and white and easy to read. It's very professionally printed on thick paper so it should also survive the winds of time pretty well. The page numbering doesn't always exactly match with the table of contents but that's just a minor fault.

So what's inside? The magazine focuses on new psych music, so there are no articles on nostalgic 60s garage rock bands etc. which is fine. Also, the idea seems to be to bring forth some of the best stuff going on in the undercurrent/underground of psych in all its manifestations which is even better if you ask me. So no HUGE names involved. There are 15 interviews with current psych acts from all over the world. Some of them happen to be my personal favourites like Krautzone from Germany (interviewed already in November 2014), Lamp of the Universe from New Zealand (very spiritual stuff...), Earthling Society (U.K), ST 37 (U.S.A.) and Flowers Must Die (Sweden), so I'm delighted to know what's going on with these guys. I had no idea that Annot Rhül from Norway were still making music, since I had not heard anything about them since Sulatron released their CD in 2007. I must have totally missed their 2014 album on Black Widow, so I need to get that now! Also, it was great to read an interview with Finnish synth lazer metal band Nightsatan who I really like! Check them out if you haven't already. There are many bands involved that I was not that (if at all) familiar with: Owl Glitters, Woven Skull, Black Panda Beach, Brigid Mae Power, Moloch/Saturn Form Essence, Trupa Trupa, Sangre de Muerdago & Demantia Five. Lots of new, interesting & varied stuff to investigate into!

Kommun 2 is a small record label from Malmö, Sweden, that has given us some of the coolest underground psych/space/prog/folk rock from Scandinavia on limited vinyl for some time now, so it was about time someone interviewed them!  Another label feature is with Giallo Disco, a "horror disco" label that I hadn't previously heard about. There are also short album reviews and other bits in between the features, which is cool. The mag does not include any adds expect one for Yoshiwara's own music releases. All in all, this is very welcome new addition to the good old printed psych magazine family and has a personal, new twist to keep things fresh and interesting. The price of the magazine is only £4 plus postage. Warmly recommended!