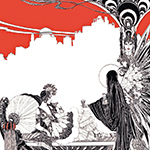 Blaak Heat (who have now dropped the last part Shujaa from their name) is a psychedelic stoner rock band originally formed in Paris in 2008 bu guitarist/singer Thomas Bellier and friends. I really liked their 2013 Tee Pee Records album The Edge of an Era, where they already combined stoner/desert rock, prog and other kinds of Western music with Arabic/Eastern influences and instrumentation . The band has now relocated to the U.S.A. and the bass player and drummer of Nebula have joined in. Shifting Mirrors is the band's third full-length and will be released next month. On this album Blaak Heat goes even deeper into the mystical Eastern vibes still not forgetting the heavy stoner rock part of their great sound.

The progressive opener "Anatolia" is an instrumental with strong Turkish psych rock influences. The melodies and rhythms really sound very Anatolian, so well done. "Sword of Hakim" is one of the best tracks and rather heavy too... Just check the video below! The longest track "The Approach To Al-Mu'tasim" starts off in ambient, Middle Eastern mode making you feel you are in ancient Persia of something. The feeling continues when the track really starts with great percussion work and progressive rhythms. Now where are those belly dancers? I can also smell the black smoke... Brilliant! You are inside an exotic party/orgy in One Thousand and One Nights. The short "Taqsim" takes you deeper into the Arabian desert at night, and "Ballad of Zeta Brown" is a heavy and groovy stoner/psych rock blasting with progressive rock (and even Western movie soundtrack!) leanings. Karma to Burn or Nebula comes to mind, in fact. Great instrumental! Okay, the tight and heavy rocking ""Black Hawk" cuts like a razor sharp saber and is another highlight for me... There really are no fillers on this one! The instrumental "Mola Mamad Djan" gets more Oriental again, very nice and authentic vibes. "Tamazgha" is a bit more relaxed instrumental, and "The Peace Within" another killer track with great vocals that somehow brings to mind early Pink Floyd and Voivod at times. "Dance Nomad" ends the album in a rather slow and atmospheric style. I'm somehow reminds me of another desert psych band Black Sun Ensemble... This is a really great, interesting and mesmerizing album and definitely worth checking out!