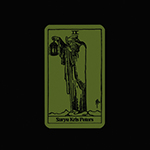 The Hermit is a highly limited (100 copies only!) vinyl album including the best tracks from two digital solo albums by Samsara Blues Experiment's main man Christian Peters from Berlin. I reviewed his first solo album Status Flux last year, and in early 2016 he released another digital album "Moonstruck" that I had not heard before. In his solo work Christian/Kris focuses on meditative instrumental ambient music with some cosmic kraut and Far Eastern vibes. The A side of this album includes four tracks from Status Flux, namely "Eremitage", "Ragamati", "Winterbottom" and "Snow Feather". The first two and the last one are more electronic and synth/keyboard-driven ambient pieces, the shorter "Winterbottom" has guitar and organ.

The B side starts off with the over nine-minute great, atmospheric electronic synth piece "Legend of Raja Shakuu". Strong Japanese influences are shown on this side for sure. "Moonstruck Serenade" is a shorter piece with also some piano sounds and psychedelic space sounds, especially towards the end. "Chandra Luna" has at first a light, rather ethnic flavor, but it gets deeper and more drone-like after a while. This is the longest track at 9:39. The last track "La Morrina" has guitar again and is a beautiful, folky number. This album is recommended for minimal meditative music fans who love limited vinyl releases.