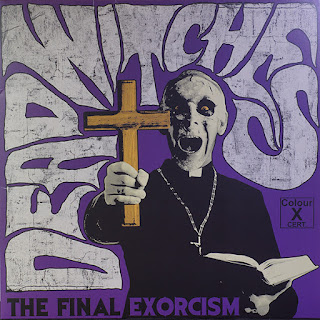 After the short intro "There’s Someone There" the crushingly heavy, doomy & stoned "The Final Exorcism" forces you to close your eyes and just nod your head to the beat. I am spellbound immediately. "Goddess of the Night" follows the same path pouring into your head with slow, heavy & doomy riffs. There's also some cool solo guitar work and organ later on. Very dark stuff! The shorter, melancholic, less heavy "When Do the Dead See the Sun" is some kind of ghostly, psychedelic ballad for the dead and the following "The Church by the Sea" is almost exactly like from the couple of first Electric Wizard albums. Great, Iommi-like riffs on this one! On "Lay, Demon" the band gets even more into doom metal, very gloomy stuff. I like the part when the track speeds up a bit and rocks out more, very welcome addition after all the slooow, ultra-heavy pounding. The long "Fear the Priest" (Mark really seems to have an insane obsession with the priests, the church and religion...) ends the album in sick, disturbed atmosphere. It's heeavy and crushing to the max and keeps you firmly in its grip until the end. All in all, although maybe not offering much novelties to the genre, The Final Exorcism is definitely one of the finest slabs of heavy, occult/horror themed psychedelic stoner doom metal there is.