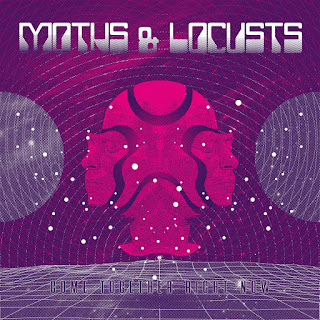 Moths & Locusts is an original sounding psych/space rock band from Nanaimo, British Columbia, Canada. I fell in love with them after listening to their second album Helios Rising (2016) for a few times. After that, I've been trying to score all their releases, some of which are very limited and hard to get. Their latest outing was a cool flexi disc "Come Together Right Now" that you can only get when you order the latest issue of the excellent Optical Sounds magazine (issue #12). Warmly recommended! What we are dealing with now is a VERY limited (just 100 copies) LP of eight remixes of that track by Rob The Viking & Watson, Mongst & Khufu, Galactic Butterfly, Wide Eyed, King Pong Dub System, and Wasted Cathedral and an alternate mix by Moths & Locusts themselves. If  these names don't say much to you, it might make a bit more sense to add that they include members of other cool, current Canadian psych bands Shooting Guns, Radiation Flowers, The Switching Yard, Moonwood, Heavy Moon, Wide Eyed, Swollen Members, Shearing Pinx, Behaviours, Crotch, and Anunnaki. All these are worth checking out on their own right!

The idea of buying an LP's worth of mixes of  just one track might not feel that appealing to you at first. For me, the fact that it was a Moths & Locust track was enough! Also, I must say that all the remixes are very different so you won't definitely get bored. The opening Rob The Viking & Watson remix is probably the closest to the original, very hypnotic and spacey. "Republic Of Doom remix" is "bent, folded and twisted by M&L" themselves and is mostly focused on the female/male vocals with just minimal backing. Things get spookier and louder towards the end, though... Strange and wonderful! "Siren Of The Moth remix" by  Mongst aka JV_DUB is very ambient and experimental in nature, it's hard to recognize as the same song. "Mothers Of The World Unite" remade by Galactic Butterfly is cool minimal electro and "Moth Heads Unite remix" by Mongst and Khufu maybe closer to trip hop or jungle. Max Frazer's "Wide Eyed remix" starts off in a very tranquil, relaxing way but builds up towards the end. Rather psychedelic vibes... "Dub Together Right Now remix" by King Pong Dub System has a groovy, spacey electronic dub feel and it's one of the highlights for me. Very hallucinogenic... One for the late-night after-parties for sure. "Come Together Right Now (Wasted Cathedral remix)" finishes of the album in cosmic, ambient high. Wow! The album is only sold through the Moths & Locust Bandcamp site and there are still some copies left so be quick!