Sonora Sunrise - The Route Through the Canyon 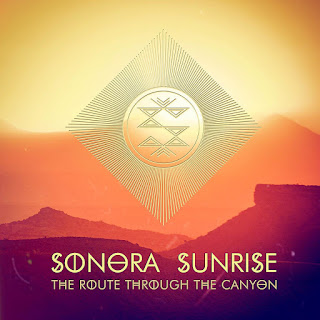 Sonora Sunrise is a new band from Altai in Russia. The ancient shamanic traditions and other-worldly vibrations of this mystical, spiritual place of deserts and mountains is clearly mediated through the band's psychedelic, atmospheric, mostly instrumental music. They have elements of calming ambient, space rock, psychedelic rock and even stoner rock. The main tracks were mostly improvised live in 2016 and more guitars, synths, samples etc. were added later on to a stunning effect.

The album's intro "Ancient Stones (Sundown)"
has some female vocals and sets the listener in a suitable trance mode. The album's longest, 11-minute "Welcome to the Sandland" starts off with a short spoken world sample and then the wonderful journey begins, at first gently and later on also getting more intense. This is really trippy, floating and heady stuff, I love it! "Unexpected Trip" has cool synth lines and a groovy beat, very nice. This is one of the most progressive pieces on the album. "Poison" is a more guitar-oriented jam but there are some spacey synthesizers in there too. "Ancient Stones ( Uprise Of Jupiter)" is a short ambient intro and then, starting in a very calm manner and featuring loose female vocals, "Canyon" builds up towards the end with some soaring lead guitar etc. Beginning with a sound of someone lighting up a joint and taking a deep toke, "Millions of Snakes" is the album's heaviest piece and comes very close to some of the psychedelic stoner rock bands. Later on it takes a turn into Ship of Fools styled adventurous space rock. Cool! "Roadside Picnic" is a nice, more positive instrumental that somehow brings to mind King Black Acid. The dark, very mysterious sounding outro is called "Ancient Stones (Planetary Standoff" and leaves the listener in a weird haze. In summary, The Route Through the Canyon is a route you really should take if you are into atmospheric, spiritual and spacey psych rock. It's great to notice that the desert rock movement is alive also in Russia and has it's own, shamanistic vibe!