Lamp of the Universe - Align in the Fourth Dimension 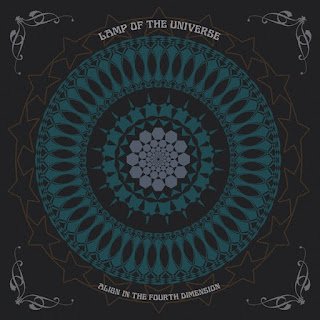 Okay, it's no secret that Lamp of the Universe has been one of my favourite bands (well, one-man-bands, anyway) ever since I first heard the first CD Cosmic Union released on Cranium Records in 2001. It was a perfect blend of Eastern mysticism and spirituality, cosmic vibes, acid folk, space rock and psychedelia and that's what still makes LOTU so special.  Multi-instrumentalist Craig Williamson from New Zealand has been busy with music since then and even before with his stoner rock band Datura. Be also sure to check out his recent, a lot heavier but just as hypnotic and mesmerizing band Arc of Ascent. Anyway,  Align in the Fourth Dimension is the 11th album by LOTU if you don't count the split LP's with Krautzone, Trip Hill and Kanoi. As always, Craig plays all the instruments (including guitars, sitar, bass, drums, percussion, organ, synthesizer and mellotron) by himself. The limited LP version has seven new tracks and the CD version has one extra track.

"Visitors" opens up the chakras with beautiful, melancholic acoustic guitar, analogue space sounds and soft, wonderful vocals. There's also some mellotron later on and I'm already floating deep in space! "Rite of the Spheres" is a heavier, hypnotic stoner rock mantra that works really well too.  "Light Receiver" is an Eastern-tinged acoustic piece in a more ethnic folk style, very nice. Then it's time for a slow, droney "New Forms" that has lots of cool ebow guitar too. Mellotron gives a nice, ethereal touch to the pretty and sad "The Leaving", sort of an astral ballad. We also get some fuzz guitar and drums later on. "Absolution" is a great, hypnotic sitar/acoustic guitar/percussion/vocals track that gets you in a trance. The CD-only track "Call from Beyond" is rather minimal with just acoustic guitar and beautiful vocals. It's also rather short (but sweet) at just 3:39. The album is finished off with the almost nine-minute "Seasons of Love". It somehow reminds me of The Spacious Mind from Sweden, very trippy, spacey, other-wordly and tranquil stuff. Amazing ending for yet another superb LOTU album! Warmly recommended.