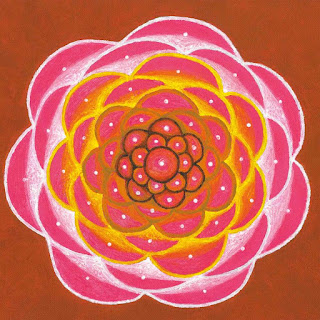 Organik is a new Danish instrumental psych rock trio. When I put this promo CD-R on I was immediately reminded of Texas psych legends Liquid Sound Company, but later on also bands like Monkey 3, My Sleeping Karma and Glowsun just like the promo sheet says. Also, bands like Naam and Blaak Heet come to mind, so there are also some heavy stoner and space rock elements. In addition to the basic guitar/drums/bass tracks there are lots of spacey effects, percussion and some guests on spoken word, didgeridoo and keyboards.

There are three long tracks on the LP. "Black Desert" evokes the dreamy desert acid psych vibes of Liquid Sound Company, but during the last two minutes the going gets very intense and heavy, almost metallic. Great tune! "Soul Manure" starts off in a hazy, atmospheric manner and has keyboards as well as nice little psychy sound effects and a tribal percussion pattern. Before the three-minute-marker there is a strange, progressive part and then the heavy stoner rocking begins. Later it gets more tranquil and hypnotic again, nice. On side B we first got the albums longest (13:08) "Liquid Embrace". It has a weird, dark almost jazzy experimental feel to it, sort of like Primus. This must be the most progressive piece on the album and has lots of different stuff in it. I enjoy most of it. "Caged" finishes off the album with beautiful, peaceful and almost post-rock like soundscapes. There is also some cool spoken word in Danish by a rapper called MC Einar and it works. The LP is already in stock at Sapphire Records and available on black (140 copies) and pink (170 copies) vinyl.