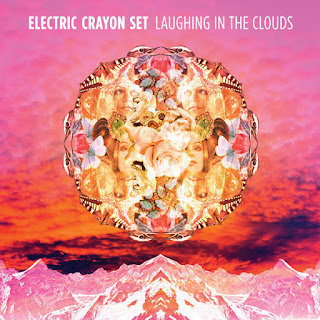 Laughing in the Clouds is the third album by Pori, Finland based indie/mod/psych pop/rock band The Electric Crayon Set. I have reviewed their two first, CD-only releases in my previous net zine Psychotropic Zone (not online anymore, sorry). The band is led by guitarist/singer Timo Pääkkö (ex-Penniless People of Bulgaria and Kinsky, also in Love Messengers etc.) and other members are Seppo Tyni: bass, Timo Lilja: drums. Timo's daughter Vilma Pääkkö is singing georgiously on one track and there are also some other guest musicians on board. This time the album is released only on vinyl, limited to just 300 copies.

As always, the music is a sort of mix of 60s mod/psych and 90s indie pop. The album has eleven rather short songs beginning with the happy and up-tempo "Pete Is Laughing in the Clouds". "Dreams of the Rain" is slower and includes some cool vocals and guitar work bringing to mind The Bevis Frond a bit. Sung by Vilma who really has a nice, clear and professional sounding voice, "Calling On The Cards" is a pretty ballad with some keyboard orchestration. Nice! The faster "Ignis Fatuus" rocks out again, and I gotta say that I also really like Timo's voice. Great harmonies on this one, one of the highlights. "Where We Are?" is slower stuff again, a sort of bluesy number with some acoustic guitar as well. "Isthisthewaythatyoufeelthatyouwantmetofeel?" starts of with some psychedelic sound effects and then the fast, cheerful pop beat begins. "Back To The Spaceage" is an interesting progressive pop composition with maybe some ELO or BÖC vibes. "Music to Watch Accrington Stanley by" is rather cool and original as well, I like it. The emotional and atmospheric "After The Show" is next and has a bit weird, sort of jazz-rock-fusion or Zappa kind of twist also including some spoken word. The album's longest track "Moonlit Graveyard, Pt. 1 & 2" ends it with melancholic but beautiful vibes, just wonderful. I like this album since it is at the same time pretty easy to listen to but also includes more clever twists and turns that you at first can realise. Progressive pop, maybe? I think the highly limited edition is almost sold-out already so be fast if you want one!