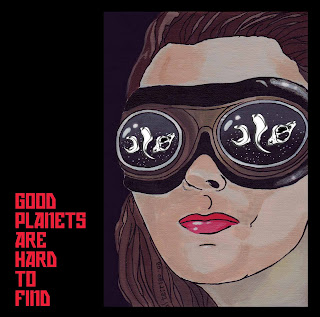 This is the first vinyl issue of a 2009 studio CD by our favourite psychedelic space rock improvisers Øresund Space Collective. This was a sort of transformative period for the band as they incorporated sitar and some other new elements and players to their sound. On this limited 2LP, two of the tracks (the first and the last) are now longer than on the original CD, but otherwise the music is the same, so I will just quote my original review here below...

Now the instrumentation also includes sitar for the first time and it's played by Siena Root's KG who also plays some guitar and Hammond. The familiar synth player Ola is not involved on this disc, but Dr. Space and Mogens make sure that there are enough of those psychedelic space sounds in there. In addition to KG, the guitar is only played by Tobias, so the sitar tracks don't have that much guitar. As always, the music on this album was recorded live with just one take and fully improvised, and then they have picked the best pieces from the recordings to be used later on.

The title track ”Good Planets Are Hard to Find” is an amazing sitar jam that's totally new for the band. They have given lots of space for the great sitar playing and other elements are mostly just bass, light drums and delicate guitar. Apart from the occasional space sounds there are no synthesizers or keyboards. Towards the end the going gets a bit more energetic, and the very end gets you in trance... Excellent stuff! ”Space Fountain” is a mid-tempo acid rock jam, that also has some organ sounds and a superb synth solo in the end. There's also plenty of great guitar playing and space sounds. ”Orbital Elevator” is a really groovy, electric, up-beat and very psychedelic piece, that rocks very well. This sort of reminds me of Ozric Tentacles. Space rock, baby! The more peaceful, celestial part in the middle is pure ecstasy. Some of the best stuff on the album, and we will start to see those good planets by now for sure...

The Pretty slow ”Pp746-3” includes for example great synth melodies and organ sounds. At around the four-minute-marker the going starts to get more powerful and we can hear some hypnotic rocking. The percussion work offers a nice extra feel during the guitar solo. It's also very nice that the boys have been brave enough to incorporate some more chord variation. Later on there is a swinging ¾ time signature going on. The funnily entitled ”My Heel Has a Beard” is the album's shortest, only six minutes and something long hallucinatory jam that doesn't necessarily take you anywhere but what matters here is the trip in itself. The Eastern sitar stuff continues on the last, almost 20-minute (now 23, Edit.) long piece called ”MSTTS”. Just like on the opener, also here the sitar gets lots of room, but there is still some more guitar on this one, especially towards the end. The track also includes percussion. The going gets more intense and those cosmic space sounds that Dr. Space was first let to mess with at Dark Sun's rehearsal place ten (now 20, Edit.) years ago are all over the place... This is a very strong and successful ending for this OSC album that I'd dare to say is their best in many ways.

Okay, now back to present time... This new 2LP vinyl edition is available on three different coloured, very limited editions so act fast or loose the opportunity for ever... There are rumors that OSC will be performing in Finland again later this year, so keep on checking out this blog for details when we have them!