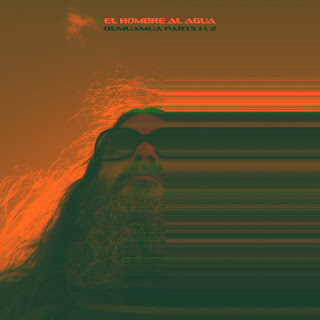 Oumuamua Parts 1 & 2 is the second solo album by Dave Read, the bass and synth player of excellent Canadian space/psych rock group Moths and Locusts. He's also involved in other projects like the experimental psychedelic doom band Anunnaki. His first album as El Hombre Al Agua was released in 2017 on super limited  CD-R and LP (just 67 copies!) editions that are both sold-out. This new one is somekind of homage to the peculiar shaped interstellar asteroid Oumuamua that was first sighted in 2017 and has probably been cruising through the Milky Way for hundreds of millions of years. There have also been some speculation that it is a probe sent by intelligent alien species, who knows... Anyway, it's a perfect theme for a psychedelic, cosmic and spacey ambient drone album like this one.

Part 1 (side A) is divided into eight and Part 2 (side B) into four, shorter segments that fuse into each other seamlessly. The album starts off very quietly and slowly with "The First Distant Messenger" and all you have to do is close your eyes and pay attention and you are flying through distant space. The creative use of a vast array of instruments (guitar, bass, bass synthesizers, singing bowls, cymbals, electronic tampoura, synths, pedals etc.) assures a lush, enjoyable, full and very spacey journey through the galaxies. I like the track titles like "Vega, In The Constellation Lyra", "Towards Earth At 315000kmh", "600000 Years Alone With Nothing But Space Dust", "Oumuamua Speaks" etc. The overal vibe is very tranquil and ambient, but there's still enough stuff going on to keep you interested. It's not just drone since there is also some rhythm and melody in the mix. The album is fully instrumental and I prefer it that way. All in all, this is a great, adventurous and dark album of cosmic ambient space music that you should really check out. If you want the LP you must hurry up, though. The deluxe edition with cool, huge poster and CD-R (40 copies) is already sold out, but there are some copies of the standard issue (just 60 of those made) available. Both are on "space gas green" coloured vinyl...