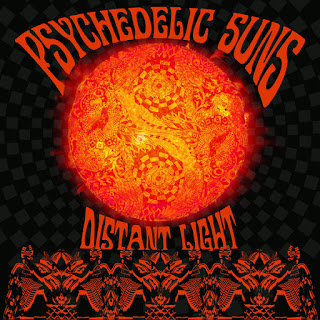 Psychedelic Suns is a solo project by multi-instrumentalist/vocalist Pauli Partanen from Finland. I had never heard of him until this CD collecting some of his best works from 2015 to 2018 was released late last year. Pauli has also produced the album by himself and doen a relatively great job at it, I might add. The sound still has that certain home-made vibe but I like it. The great album cover design is by Dale Simpson who of course was perfect for the job. You can find quite a lot of other stuff at Psychedelic Sun's Bandcamp page, but this seem sto be the first physical release.

The CD includes seven tracks and five bonus tracks not on the download version. The music varies quite a lot, but's it's all in the 60s/70s vein. There's acid folk,  groovy, danceable latin styled stuff that brings to mind Death Hawks or The Hypnomen or, indeed, Santana, experimental electronic weirdness, heavy space rock, early Pink Floyd styled trips, hypnotic and dark ethnic vibes, laid-back psych rock and everything in between. I won't go though all the tracks this time, but I do like them all. I hope that the next Psychedelic Suns release would be on vinyl since Pauli's mind-blowing, adventurous music really deserves it. This is great old-school loner psych for the new millenium, try it!