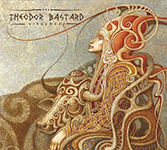 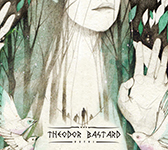 Theodor Bastard is a Russian Ethnic folk/psych/ambient/Gothic/Electronic/World music group from St. Petersburg. They have been releasing CD's from the beginning of the millennia, and just recently sent me a couple of their latest releases. I had never heard of them before, but got to confess that I like their hypnotic, mystical sounding music that combines ancient acoustic instruments and folk music vibes with modern sounds. There's everything from traditional folk music, trip hop and rock fusion in their music. I'm often reminded of Dead Can Dance or Theodor Bastard's fellow countrymen Ole Lukkøye, also from St. Petersburg.

Oikoumene was originally released in 2012 in Russia, but I got a German reissue from 2013. The CD includes 12 tracks in 64 minutes. There's also a highly limited (200 copies) LP version with two less tracks out there. One of my favourite tracks is the quite Ethnic sounding opener "Takaya Mija". I love the female singer's voice and the percussion and other instrumentation that makes this sounds very tribal. "Gerda" has more modern instrumentation like keyboards and electric guitar making it sound more like Mountain of One or even Pink Floyd with its great melodies, another highlight. Some of the songs are much more minimal and acoustic/folky in nature and also feature male vocals, some bring to mind Massive Attack with trippy beats. I also really like the rather dark, Dead Can Dance like title track and the mystical "Anubis". The last track "Benga (Fun-Da-Mental Version)" is a remix by Aki Nawaz and more experimental, rhytmic and electronic sounding but pretty interesting too. A very cool album!

The new album Vetvi is a collector's edition in very nice digipak (with text in Russian) inside a slip case (with texts in English). It also includes a booklet (in Russia and English). The CD lasts 49 minutes and includes ten tracks. The album starts off with the very peaceful and melancholic "Umbraya Erze" that only has acoustic instruments (like bone flute, Siberian violin, hurdy-gurdy, percussion), lead vocals and a choir. "Vetvi" also has electronic beats, synths & keyboards in addition to strings etc. "Salameika" is another slow, soulful song at first, but it grows when the modern Ethnic rock beat is added in the middle. The beautiful "Kukusha" starts off in ambient mode, but soon a cool, trip hop styled beat is added. I really like the vibe on this one. On "Aion" the band plays a bit harder rocking psych rock and I like that side of them as well! A great track. "Niti" is rather minimal stuff, and the same goes for the beginning of "Veter" that grows into A Mountain of One like hypnotic groove. "Yaard"has for example dulcimer, cello and didgeridoo on top of modern electronics and and female vocal melodies are amazing as always. The slow and mesmerizing "Beliy Gorod" has an ancient, mysterious vibe to it, and so does the last track "Colodec", although there is also some programming. Another great album, and this band is definitely worth checking out if you like deep, dark, percussive, Ethnic, acoustic/electronic fusion music with some psychedelic vibes, great musicianship and amazing vocals.