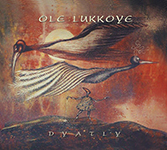 Russian's own  shamanistic, ethnic world/psych/electro masters Ole Lukkøye have been around for over twenty years now, but this is their first new studio album in nine years. It's been five years since their latest compilation Petroglyphs as well, so I'm happy that they have something new to offer now. On this new album they wanted to keep the sound pretty simple and close to the live experience. So most of the music was recorded live in studio, just some percussion and lead vocals were dubbed. They have also used cool studio wizardy to create a really spacey, psychedelic, tribal and hypnotic result. I fell in love with the band in 2000 when they released Crystal Crow-Bar on Klangbad and was really happy to find a copy of their debut album on vinyl shortly after that.

There are only five tracks on this 67-minute CD. Four of them are pretty extended, and in the 14-18-minute range. The overall vibe on the album is deep, trance-inducing and mind-altering as always, but this time there is more room for psychy effects which is great. The sound is created with excellent female female vocal improvisation, male vocals, keyboards, guitar, programming, gluckophone, bassoon and different kinds of percussion etc. as well as those spacey soundboard effects. The experience is really other-worldly, and the listener feels like being transported into some mysterious, magical and ancient place. I really like the fist track "Kommuna Ra" that starts off with something that sounds like wolf's howling. It's a hypnotic, very percussive and dreamy piece with lots of spacey swooshes, bleeps and other trippy effects. The title track "Dyatly (Woodpeckers)" is a rather relaxed and mellow affair, but grows a bit along the journey. And what a journey it is... "Bela Dama" has a bit more energetic beat you can dance to which reminds me of Ozric Tentacles a bit. "Just Wind" is a little more electronic in nature also including some pulsating sequencers. The last track "Veni, Vidi, Vici" is the shortest at 3:53 and it's a very chilled-out, ambient and peaceful piece. In summary, this is an excellent piece of shamanistic world/folk/psych/trance music that deserves to be heard all around the globe.