Moonwagon - The Rule of Three 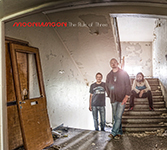 The album starts off with the rather progressive "The Infinite Pattern" that sounds to me like Rush or latter day King Crimson, although totally instrumental, like rest of the album apart from "Run to the Sun". On "Forgotten by Time" the bass is playing an important role, and this brings to mind some 70s/80s rock/jazz fusion albums that I have gotten rid of years ago. When the track starts to roll it gets better, and I'm reminded of Wigwam. The bass solo sounds like Pekka Pohjola or something, not bad at all! "Fresh Avocados" is a short, cheery, acoustic-driven piece that only lasts for a little over two minutes. "Run to the Sun" has vocals too, which if I remember right is the first time for Moonwagon. This is a rather up-tempo, sunny and happy song and has some cool synth sounds and a nice guitar solo. Actually this brings to mind the 80s U.K. free festival scene heroes The Magic Mushroom Band, but I doubt that the Moonwagon guys have actually ever listened to them. "Skylines at Night" is a very nice melodic progressive hard rock piece with some great atmospheres and playing. The album is finished with the almost 17-minute "The Journey Back Home" that has a very peaceful beginning. Then there's some soulful, bluesy going, and then things get more progressive and interesting. Around the nine-minute marker the track gets heavier and starts to rock out, very nice! Then there's some jammy, jazzy stuff, and things cool down until the very end where there is a more powerful part again. Maybe the highlight for me! Warmly recommended to fans of progressive rock with some fusion and space elements.