The Band Who's Name Is a Symbol: Masters of the Mole Hill 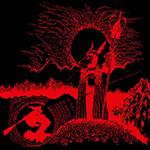 I must admit, that although The Band Who's Name Is a Symbol from Ottawa, Ontario, Canada, have been around since 2008 and released even nine vinyl only albums (the way to go!), this latest release is the first that I've heard. Their instrumental, hard-rocking and pretty raw and punky music is a cool mix of space rock, krautrock and improvisation.The album (or at least the digital download promo) sounds pretty much is was recorded at a rehearsal space or something, so don't expect super high quality which is for pussies anyway. I'm not saying the album sounds bad, just pretty rough and raw which matches perfectly with the vibe. I think the band is now a six-piece, and I can hear mostly guitars (also solos!), bass, drums but there are also some keyboars/synthesizers in there. The more floating pieces are the experimental opener "Underworld" and especially the last, long and at first almost ambient, then sort or tribal track "Ice Rings". A bit slower "Darkness" sounds like a heavier version of Amon Düül II and has more keyboards. Most of the tracks are rather energetic and up-beat and rock hard. For fans of raw, hard-hitting psychedelic rock!