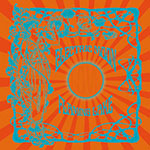 Okay, another reissue from Sulatron Records from Germany and this time by Dave and Lulu's own band Electric Moon. Flaming Lake was originally released on CD-R (250 copies) in early 2011 and soon after that on 2LP (500 copies).  This great live album has been a real favourite among the fans and due to the limited editions has became rather sought after so now it was time to put it on proper CD as well as press another 500 LP's, this time on blue vinyl.


Although Flaming Lake is a live album the sound is excellent. By the time this was recorded the instrumental trio had progressed a lot in their live jams and it seems to me that Dave and Lulu had recently got some new gizmos to their effect collections since the sonic world was more varied and even more psychedelic than before! In addition, Lulu in particular plays more fluently than before which is nice.

Flaming Lake includes four long jams that were recorded in Battenberg on 2nd July 2011. ”The Cosmic Creator” truly leads us to the Great Psychedelic Creator and what a journey this is! As usual, the band starts off slowly creating cosmic moods but later on they rock much harder. Amazing! The psychedelic “Flaming Lake” doesn’t get that heavy than the previous track but rocks out nicely in the middle. The album’s longest jam is the closer to 24-minute-long ”Lost and Found Souls” that has some Eastern, mystical vibes and even gets close to some doom metal bands. But don’t worry freaks: this still is a really hypnotic, cosmic and mind-expanding jam! ”Burning Battenberg” is a bit lighter, spacey going including for example some delay guitar but later on it gets closer to psychedelic stoner rock. On this track Philipp from Daturana replaces Alex on drums and he does a great job as well. The whole album is full of superb stuff and this really is one of the best live releases by the band so far! It's really cool that this stuff is now available again for those who missed it the first time around.