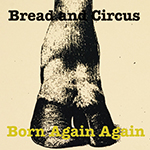 Bread and Circus is an American indie rock band with some punk and just enough psych vibes for me to include this review on my psych blog. Another reason of course is that this CD was released on SlowBurn Records, who have given us great albums by Black Sun Ensemble and Sun Zoom Spark etc. and it also features several psych rock musicians from the Tucson scene. The promo sheet compares this album to Jayhawks (never heard them...), Peter Green from Fleetwood Mac and Blue Cheer, and maybe they know they are talking about. Personally I like the fact that some songs (and great guitar solos!) remind me of British indie psych heroes The Bevis Frond and maybe also Neil Young, especially the last, rather heavy and great track "Tired". Some of the songs and melodies also bring to mind some Irish folk/indie rock acts and well as country music. Highlights for me are the energetic opener "Black Wing Bird" that has plenty of psychy, fuzzy guitar work and the slow, bluesy and melancholic ballad "You Were in Love". "Clumberland Farms" is pretty straight forward punk, and I also like the mid-tempo and bit darker "Scarecrow". This is not the kind of music that I usually listen to, but I still like it.