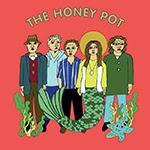 The Honey Pot is an English psych rock/pop band formed in 2012 in Devon. They have a deep love for psych rock from the late 60s and you can hear that in their wonderful music. Their sound has both U.S. West Coast vibes as well as strong British elements, and bands like The Yardbirds, The Doors, The Small Faces, Jefferson Airplane, Donovan, The Kinks, The Flaming Groovies, Spirit, The Hollies, The Jeff Beck Group, Love, Kevin Ayers and The Rolling Stones have been mentioned as their influences. I first heard about them when their wonderful female singer Crystal Jacqueline released a solo 7" on Fruits de Mer and soon after that her debut solo album on Mega Dodo. She has now also released another solo album and they both are excellent. While Crystal's solo stuff is mostly more acid folky psych, The Honey Pot is more rock and pop oriented, but still usually rather gentle and very pleasant stuff. They released their first album To the Edge of the World in 2012 on Psychecandy Records, and there is also a split double 7" with Crystal Jacqueline with some great cover tracks on Fruits de Mer that I like very much. This stuff has also been re-released on Mega Dodo with bonus tracks on CD as Electronic Memory (sold out...).

Lisa Dreams / Into the Deep 7" is the first edition in Mega Dodo's singles club that will also feature Finland's Octopus Syng among other superb artists. If I have understood correctly, it's also possible to purchase individual singles but the numbers are very limited. The A-side is a simple, cheery, melodic and catchy pop psych treat that only ends too fast. Great lead vocals by Crystal. "Into the Deep" is a slower, longer and sort of bluesy number that has male lead vocals and a stronger, more energetic chorus. I'm reminded of Spirit a bit, I think, not bad at all! This marvelous 7" should be out in January and I recommend you to preorder it right away.

The full-length album Inside the Whale includes nine previously unreleased original compositions in 40 minutes and will be released on LP and very special 3CD set. Both formats will be ultra limited, how ever, so hurry up if you don't want to settle for the digital download. All the songs are just amazing, but I'll try to find a few highlights. The opener "The Outskirts of Your Mind" is definitely one of them. If you like the sunny, trippy vibe of the 80s UK Festival Scene faves The Magic Mushroom Band you will love this as well. I'm also reminded of The Byrds etc., just great melodic psych rock/pop stuff. The longest track is the title track that also has flute and more prog/Canterbury mood. Excellent! "Psychedelic Circles" is a very cool, a bit whimsical track with some weird backwards guitar & other psych effects. Some of the tracks are rather laid-back and dreamy, like the beautiful "Walking on Eggshells". There are also some more folk vibes towards the end. All in all, Inside the Whale is a wonderful, atmospheric and deeply emotional album that works and sounds really well as a whole. A future psych classic for sure!