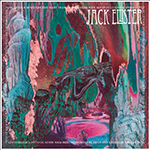 I was first introduced to the very nice and talented psych rock/folk musician and singer Jack Ellister when he sent me a CD by his psych rock band Yordan Orchestra for a review about five years ago. Jack (real name Jacek Janiszewski) is originally from Poland, but was living in Holland for a long time. He's been going solo for some time now releasing a few 7" singles and contributing on many compilations on Fruits de Mer Records and also playing quite a lot of solo gigs including one at Crabstock on Ice festival in Helsinki. Jack has now relocated in London and seems to be doing great. Tune Up Your Ministers and Start Transmission from Pool Holes to Class O Hypergiants is his first full-length solo album and features nine songs in 32 minutes. Jack plays guitars, synthesizers, percussion, violin, mouth harp and sings lead vocals being helped by some friends on drums, bass, backing vocals, horns, piano etc.


The album starts off with the rather hard rocking, 60s styled psych rock number "The Man with the Biochopper" that brings to mind early Pink Floyd among others. We have already hear this song on his first solo single, but this sounds like a new, fresh version, and I love it. "The Sun Sends Me Hails, Victory, Power, Peace and Shelter" has a more folky vibe but grows on its way. "Saddle Up the Horse" sounds a bit like early David Bowie or Tyrannosaurus Rex and also has lots of acoustic guitar as well as sax and piano. A rather nice song! "Calm Adapter" is minimal, atmospheric, experimental and very peaceful piece to end the A side. "Great Esmeralda" is one of Jack's best and most effective songs with a superb chorus and a definitive highlight on the album. "Curator" is a short, weird, trippy and experimental piece a bit in The Beatles style, and then comes the beautiful, melancholic acoustic psych folk masterpiece "Wishmachine" that I really like a lot. "Old South" is one of the most experimental pieces on the album, and sounds like an old steam train going very slow on a hazy, mysterious landscape. The album is finished with the pretty and psychedelic, organ driven "A Hunter Needs a Gun" that again remains me of early Pink Floyd and has an epic ending. What a great song and a perfect way to end the album, I'm in awe. I'm afraid it might be impossible to get a copy of the first LP pressing that is due out soon since there will be only 111 copies made, but I get the album will be available in other formats as well.