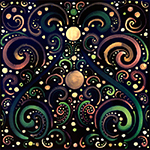 I must have received this album almost a year ago for a review but somehow forgotten about it, so my apologies... Of course I must say that a band called Å that has a self-titled album without any mention of a label is pretty hard to google down as well... But the name means stream/river in Swedish, so it's actually a pretty cool name. Anyway, now that I remembered this great album again and even found the band on internet, let's get to business. Å is a progressive, psychedelic and experimental rock/folk group from the woods of Uppsala, Sweden, and this is their first album. Like very often in Sweden, there are links to some other cool contempary Swedish psych acts like Me and My Kites, and a very strong 70s vibe.

The album has eleven tracks. The band starts off with the at first peaceful, under-three minute "Hijazz". It's almost instrumental, hypnotic stuff with rather heavy guitar sound and mystical sounding horns. The track turns directly into "Jag Vill" and things get more progressive and we get some great, melodic vocals as well. There's some wild, heavy jamming later on... "Änglarna Dansar" begins in a very mellow way, there's also some keyboards on this one and more saxophone by legendary Swedish musician Roland Kejser who's been playing since the late 60s (Arbete & Fritid etc.) and plays on the whole album. On "Joelbitar" the band gets more psychedelic and rocks out. This is the longest track at 8:13 and reminds me of the early 70s Swedish heavy prog/psych rock, like actually most of the album. "Soluppgung" has a more folky vibe at first but gets deeper and pretty hallucinatory and I really like this one. "Nej Se Det Snöar" is a bit more experimental but heavy piece, "Måndåren" a slow, bluesy number that also has Swedish folk vibes. The B side begins with the soft sounds of "Du Gamla". "Du Fria" is more powerful stuff again, also having some reggae elements. Kejser's great playing adds lots of additional layers as always. One of my favourites is the hypnotic "Tågfärd" that sounds like an improvisational jam. It turns into classic Swedish lullaby "Trollmors Vaggsång" that first gets heavier and then jazzier and somehow fits in really well. What a cool way to end a great album! If I have understood correctly, this vinyl album is a limited edition of just 200 copies but it still seems to be available from the band's Bandcamp site so hurry up! We can also expect some new stuff by Å hopefully next year.