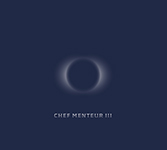 Chef Menteur is a psychedelic space/art/prog/post/shoegazer/drone/ambient rock band from New Orleans, and they have been putting out albums for ten years now. This triple CD-R release is the first one that I've heard, and it's a pretty interesting package. This limited edition, professionally printed 3CD-R in cool cardboard cover includes a re-release of their 2012 2LP East of the Sun & West of the Moon, the unreleased companion album North Tomorrow & South of Yesterday from the same sessions, and their very limited 2014 tape Force Majeure.

So the first disc includes all the 12 tracks from the 2LP East of the Sun & West of the Moon. The music differs from hard-rocking sonic assaults through ambient, atmospheric soundscapes to minimal, experimental and sometimes electronic experiments, and it can all happen even within one track. There's stuff to like for post rock fans, prog maniacs, space heads as well as those who dig modern indie rock. No matter if your favourite band is Radiohead, Lumerians or GSY!BE, you will enjoy this. The 69-minute North Tomorrow & South of Yesterday disc apparently has stuff that was recorded at the same time as East of the Sun & West of the Moon but not included on that one for what ever reason. Personally I think that most of the 15 tracks don't sound like left-overs but have distinct ideas, but there are also many very short experimental pieces that maybe don't really go anywhere special. But the best pieces, like the chilled-out tracks "Farfisa Duo Raga" and "Terpsichore (Long Version)" or the epic "The Long Stand (Parts I & II)" are really cool. Force Majeure is much shorter at 32 minutes, and only includes five tracks. "Færoe" is a very laid-back ambient piece, "Pyramid Scheme" a funky psych rock track you can dance to, and "Death Wraith 2000" a pretty heavy space rock blast. "Surface Tension" is at first more peaceful stuff but it starts to rock later on. "Immense Dimension" is a rhythmical and exciting track that also has some great melodies and more tranquil, experimental elements. Wow! This band can do some much different stuff that I can only be amazed. Somehow it all still stays together. This is a very thorough and interesting introduction to this unique and varies group, and a must have for their fans of course.