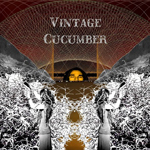 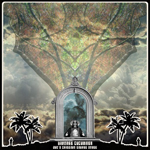 Vintage Cucumber is a psychedelic solo artist from Germany. Since 2009 he has made several digital only releases that are available at the “name your price” system at his Bandcamp site. His instrumental music is very trippy and experimental and he uses electronics, lots of effects and real instruments like bass and electric guitars. The sound quality has been getting better and better, but there’s still a certain DIY vibe in the music but that’s not a bad thing. He has been really productive this year, but let’s start with the album he already sent me last year on CD-R, Tom Mit de Bon Style. After the weird, short intro, “Captain Klötenpötter’s Reise” is a mind-expanding, hypnotic and experimental journey to nowhere. “Dicker Bienenflug” is a short, minimal piece, and on the next two numbers things get even weirder. “Herr Schiss, ich Steh Hier Los” also have some kraut beat, but only for a while, “Guten Morgen Computerwelt” is just faint electronic noises. “Farbstoff Gurkenmehl” and “Come On, Auf Zu Den Asiatischen Gärten” are both very ambient in nature, and things really start to happen only in the over 20-minute-long “The Hots Fette Sonne” that is my favourite. There’s some Pink Floyd, some early Tangerine Dream, some Amon Düül II and the like in there, you’ll love it! The going still stays pretty laid-back and dreamy, so if you need some harder rocking in your music, this is possibly not your fix. Then we still get one shorter, experimental tune called “Kuzduz”.

On this year’s Jup’s Chillout Lounge Style Vintage Cucumber goes into even more ambient, peaceful style but the music is also more harmonic and pleasant with less freaky, noisy elements. So this is perfect for a chill-out session! “Guten Morgen” starts off things in a very tranquil and soothing manner and “Himmelstempel” also has some slow, programmed beat. The mood remains pretty much the same during the following tracks, and there’s also some forest folk vibes in there I would say. “Stille, Hörst Du Mich?” is a somehow magical, blissful and psychedelic piece that touches your soul. “Glühe Sanft” is a bit more rock oriented of the remaining tracks, and even has some spoken vocals. This another highlight for me with some drums as well. Wonderful, dreamy psych stuff that gets you floating! Check this out, donate if you want and download.