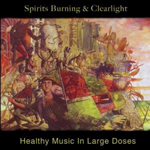 The multi-national music project Spirits Burning led by American multi-instrumentalist Don Falcone keeps on releasing great CD’s. This time Don has also managed to get a couple of members of the legendary French prog-jazz rock group to join the fun, which perhaps gives this album a more jazzy feel than usual. The crew features 41 musicians in total (Daevid Allen, as always, members of Universal Totem Orchestra, several ex-Hawkwind members, Andy Anderson, Pete Pavli, Jay Tausig…), so the influences must be really widespread.
The 73-minute-long CD has 13 tracks on it. The music varies in between electronic (like the opener “Tresures at the Dawn of the Century”), jazzy prog rock (“Raised on Coal & Oil”, “Infinity City”, “Hand Signals & Daily Horoscopes” etc.), atmospheric floating (“Healing Power of Magnets”, “Travelling Sideways”, “The Kingdom of Music”, “Italian Lake”), more experimental soundscapes (“”The Road to Shave Ice”) and laid-back reggae (“Bring It Down”). Only two of the tracks have vocals: the fourth track “Infinite City” is sung in French by Cyrille Verdeaux (the end of the track sounds very much like 70’s Gong!) and the final piece “Bring It Down” and this makes those pieces to stand out a bit, but there are probably just as good instrumentals in there. The album includes a lot of great synth, keyboard and organ, quite a lot of horns and soaring, psychedelic guitar work which makes it very pleasurable and entertaining. Not that much psychedelic ingredients and no space rocking this time, but definitely a recommended release in any case.
http://www.spiritsburning.com/