Aaeeii: See You in Seattle 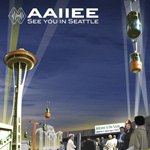 Despite that the fact that Aaeeii was formed as early as 1981 by Jeff Larson and Johnny Vinyl, both ex-members of the punk-pop band The Missing Link, See You in Seattle is their first album. I guess their musical tastes haven’t really changed in over 30 years, as this music could still be labeled as punk-pop or post-punk with some experimental psych vibes, and there’s also a humorous vibe to it. I’m often reminded of bands like The Buzzcocks, The Stranglers, Magazine, The Dead Boys etc., but Aaeei still seems to have a sound of their own. Most of the tracks could have been written in 1978, but the sound is more modern. The lyrics have a retro-futuristic theme, which is almost always fun and cool if you ask me. They tell us about the 1962 Seattle Word Fair, which had a very futuristic approach. Apparently Johnny Vinyl experienced this exciting fair at the tender age of three, and the effects have been ever-lasting. At least there is a track on the CD called “Johnny Vinyl Went to the World’s Fair When He Was 3”! Other track titles include “World of Tomorrow”, “Spece Needle USA”, “U.S. Science Pavillion” and “Monorail”. Although I must admit I like post-punk and punk-pop to some degree, this is not exactly my kind of music. But still, I like most of the songs and find this CD pretty entertaining. I like the fact that there are also some keyboards in the mix, and the songs are varied and interesting enough.
www.aaiiee.com
Lähettänyt Unknown klo 9.09