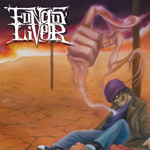 Fungus Liver is a wild, hard, dark, punky and energetic rock band from Tampere, Finland, and this is their second album. There’s some Motörhead, Hellacopters, AC/DC, MC5 and the Stooges in their sound and the music that now also incorporates some stoner/psych/doom influences seriously kicks ass. The guys have some strange and scary hobbies like cutting of their toes and eating them and shooting with shotguns. There are nine tracks on the LP and some of them are a bit longer: the stoner rock influenced “Black Hand Hails” (7:16), heavy Southern boogie “Sodom Mansion” (6:18) and the last, most psychedelic track “Ayr Dreams” (10:40) that I really enjoy. Some of the shorter songs are pretty straight forward fast, hard rocking punk, but I’m glad that they also have these groovy stoner rock vibes at times. This is quite impressive, actually. The singer has a harsh rock’n’roll voice reminiscent of Lemmy, and it works very well in this kind of music. The album is available on vinyl and as a download.
Lähettänyt Unknown klo 15.29