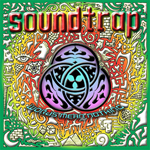 Soundtrap is a trio from Greece playing very nice, psychedelic and instrumental progressive space rock in the vein of Ozric Tentacles and the like. Drums and some of the bass are programmed, which gives the music a rather electronic feel. There are two guitar players and one of them also plays synths. Kozmic Ken told the band to send me a copy of this album and he sure knows what I like… This really is very enjoyable, sometimes groovy and trancey, sometimes more laid-back and floating ambient stuff with very good production and sound quality! I wonder why no-one has released this officially on CD or vinyl yet.

The 60-minute album has eight tracks and the last one is a Jarre cover (the bonus track “Oxygene (Live at Utopia”). “The Most Human Way to Kill” opens up the album and is one of my favourites. This is very hypnotic, powerful and trance-inducing, danceable stuff that sounds like Hidria Spacefolk, Ozric Tentacles or Korai Oröm. It has some nice, mesmerizing melodies as well. The longest (10:15) number is “Deep Blue Waterbubbles” that has some Ashra styled delay guitar and sounds a bit like Maserati. Another excellent track! “Reunion Sat” has some heavier guitar work and rocks out just like “Greed on Wheels”, that is almost metal. “Framed Herrings” is a psychedelic dub track in the vein of the Ozrics. “68 (Part I)” is lighter, celestial and beautiful stuff, and “68 (Part II)” at first electronic jungle music until in turns into heavy, hypnotic space rock reminding me of Taipuva Luotisuora. Great! The Jarre cover also works out great, so in summary this is a very good, psychedelic and spacey album that deserves a wider release!

Get Band email for free at ReverbNation.com
Lähettänyt Unknown klo 14.40