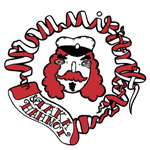 Nummiranta & Takahahmot is an underground band from Porvoo, Finland. The band has been formed around the former solo performer Antti Nummiranta (guitar, vocals) who lives in Helsinki. The lineup features the legendary bass player and sound engineer Antti Hytti, who has played for example in the original lineup of Piirpauke and with Edward Vesala and Otto Donner. The drummer Janne Rouvinen used to play in a great psych rock band Mellow Yellow and he has also done electronic trance music (and accidentally used to be one of my best friends in childhood!), but I don’t know the other members Arto Nyblom (violin, backing vocals), Timo Palmgren (percussion, backing vocals, march drum). They play a bit folk oriented, mostly acoustic music that also has hints of jazz and world music, for example. “Lätkää räpylään” has a reggae beat, and “Oonkohän mä kyttä” is straight-forward semi-acoustic rock’n’roll, and some of the songs are pure traditional Finnish humppa (polka) music. Some of the stuff also sounds like children’s music (“Lumiukko”, “Jag Gillar My Fillar”). The lyrics in Finnish are rather hilarious… I’m sure the guys had a lot of fan recording and mixing this album. I’m sometimes reminded of the acoustic Tuomari Nurmio stuff. The best song is probably the summery, 70’s styled song “Hippihäät” (“Hippie Wedding” in English) that also has some flute. The last, march song “Joskus pitää katsoa peiliin” could very well be written by M.A. Numminen. This is quite an interesting package but I really doubt I will listen to this that often.