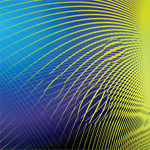 Glowpeople is a new loose instrumental collective from the U.K. that started in the Summer of 2010 and appeared on the U.K. festival scene in 2012 playing for example at Kozfest, Onboard the Craft and Unorthodox Paradox. Due to the musicians’ wide array of musical backgrounds their music is quiet hard to label. It seems to be at least mostly improvised, rather psychedelic, progressive, groovy and adventurous. Especially the trumpet player gives the band a quite jazzy feel and I really like that. One of the guys is playing guitar & effects, one keyboards, bleeps & loops, one drums & percussion and the last one bass. And they’re all very good! Some of the tracks like the dub-styled second track (either called “Metaphorical” or “Resound in H Flat”, it’s impossible to say for sure since the titles are written in such a circular manner…) definitely sounds like the early Ozric Tentacles dub jams. There’s some Gong in there as well for sure. They also have some spoken samples in some tracks which makes them more interesting. Some of the stuff could be called space rock, but it all has a nice jazzy vibe. One of the best tracks in my opinion is the second to last (“With You Without”) that has a sort of darker mood and lots of psychedelic space sounds. Also the last track “The Saddest Flower in the Vase” is really good and mind-expanding and I used it in one of my Astral Visions Radio Shows. There are seven nice tracks in 45 minutes making this a very enjoyable CD.
http://glowpeople.soundawesome.com/
Lähettänyt Unknown klo 13.37