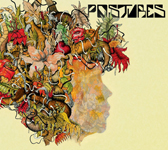 Postures is a new Swedish, female-fronted progressive psych rock band who released their debut album earlier this year. The album will also be released on vinyl and CD later by World in Sound, the version that I’m reviewing is a self-release by the band. Postures have a rather dynamic, energetic and fresh sound that is hard to define. Although they have certainly been influenced by 70s prog rock groups like King Crimson, Gentle Giant, Rush etc., they also have some more modern indie rock touch in their rather complicated but rocking music. The singer Paulina Nyström also adds in some jazzy moods with her soulful voice, that somehow reminds me of Finnish singer Noora Tommila. Sometimes the music resembles of Porcupine Tree, and there are also some psychedelic effects in there to make things more interesting. The playing and production is top-notch. During the long instrumental tracks “Solipse” and “Quakes” the band also tries out some more experimental ground. One of the most atmospheric and beautiful songs is the fifth track “Falling into Place”. You should definitely check this band out if you want to hear some interesting, well-produced and fresh progressive music with great female vocals.
www.posturesmusic.com/
Lähettänyt Unknown klo 9.40