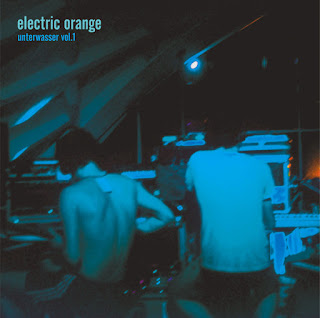 This is a limited 2LP version of the first half of an improvised 2CD-R set Unterwasser - Live 2002 that the band released on their own in 2002. The Vol. 1 in the tittle suggests that the rest of this recording from Bad Sulza, 6.4.2002, shall see the day on light on another 2LP release. I'm glad that Adansonia Records is now releasing at least some of the stuff that the band self-released on CD-R in the early 00s since the original pressings were highly limited (under 100 copies each) and I didn't get any of them at the time. Plus it's SO much cooler to have this stuff on vinyl anyway!

On this great sounding release the German electronic kraut/psych heads take us on a rather minimal and ambient journey. The line-up this time was just the "Double D": Dirk Jan Müller on synthesizer, organ and tape and Dirk Bittner on electric guitar, synthesizer, drum machine, vocoder and voice. So the performance is quite different to some of the other live albums like Live at Roadburn 2012 that featured a full band. On the other hand, the use of pre-recorded tapes and drum machine still gives it a fuller sound at times. Apart from some hand-clapping there is no clear evidence that this is a live recording. The going is very hypnotic and electronic and the use of voice and vocoder in the background adds more psychedelic vibes. The band has released quite a lot of different stuff along the years and this is one of their most ambient/Berlin School releases for sure and great for meditation or relaxing. There is still some beat and melody in there to keep things interesting, but this is not their groovy party album. There are six tracks on the album and I find them all very enjoyable and magical. Check this out!