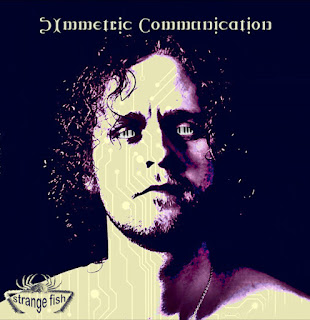 Kris Gietkowski was first found by Fruits de Mer's Keith when he accidentally bumped into Kris's versions of tracks by the first Egg album on YouTube. Keith fell in love with them and of course just had to release them on vinyl resulting in the first album by Kris called Songs From The First Album By Egg. This wonderful looking slab of vinyl was soon sold-out and a reissue in different coulours was in order. Keith also released a massive 3CD-set Three of a Kind with the Egg album, tracks from the first album by Atomic Rooster and tracks from the first album by The Crazy World Of Arthur Brown, all three discs also including bonus material. Phew! By this time it was obvious, that this Polish guy was very talented as well as obsessed with early progressive rock and Canterbury scene.

Symmetric Communication is the second LP release by Kris Gietkowski and the first to also include his own music. I'm glad it does since his closer to 20-minute composition "F/X)" on side A is just as good as the original masterpieces that he has been covering. Using just keyboards, bass and programmed drums and modern technology Kris can create a wonderful, fresh and innovative musical palette. Some might think the sound is a bit too clean or clear compared to the hazy prog pieces of the late 60s/early 70s , but I like it a lot. This is not really that psychedelic, but it's weird and experimental enough. The whole track is a wonderful, adventurous journey and you wonät get bored on the way. On side B we have two covers. "A Visit to Newport Hospital" originates from the Egg's second album The Polite Forfe and Kris gives us a truthful but fresh version. I really enjoy this wonderful, jazzy tune! The Baking Research Station's version that Fruits de Mer released in 2012 was pretty much different... It's a very rare occasion that they release two cover versions of same track, by the way! "Divided by Zero" ends the vinyl version and it sounds like another marvellous instrumental early Egg cover, but it's actually a composition of his own! He has somehow perfectly sucked in the early 70s Canterbury/prog vibe and has a way of reinventing it, nice. The promo CD-R and pretty split colour LP end here but there is one more track on the official CD version (also rare for Fruits de Mer!) so I just think I need to get my hands on that one as well. Great stuff!