You Are The Cosmos (YARC44LP) 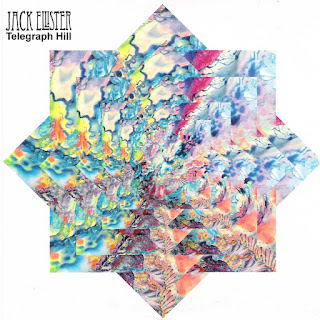 Telegraph Hill is the third album by leftfield psychedelic folk rock artist Jack Ellister. He's originally from Poland and I've been following his career since his Yordan Orchestra days in Holland nine years ago. As a solo artist Jack Ellister has been releasing stuff on Fruits de Mer since 2012. Telegraph Hill was first put out in May for the Fruits de Mer 10 year anniversity show as a hand-numbered CD-R in a tin box limited to 100 copies. On the 27th of this month it will be also released on vinyl and digital download on You Are The Cosmos.

What we have here are nine original compositions by Jack, so no 60s covers this time. All these simple little tracks have a warm, home-made vibe and apart from drums and percussion on a few tracks all instruments are played by Mr. Ellister himself. The mostly acoustic album is only 28 minutes long and was originally intended as an EP. "Roots" is a short but sweet folk ballad with just acoustic guitar and vocals. "High Above Our Heads" has more instrumentation like drums, bass and electric guitar and has a more psychedelic feel. "Maureen Feeding the Horses" is a short instrumental, and "Fill Another Glass" an acoustic, Irish styled folk piece also including some violin. "Mind Maneuvers" has a bit of a jazzy vibe and grows along the way getting more experimental and also including some weird effects. The title track opens the B-side and it's a great, short and simple folk piece, like the beautiful "Reminder". "Icon Chambers" is a cool, relaxed but trippy instrumental with cool synthesizers. The last, instumental track "Condors" is the longest at 7:23 and it's a deep, hypnotic and psychedelic journey with acoustic guitar, didgeridoo, percussion and nice synth melodies and also some lead guitar towards the end. Very nice! Fans of Jack Ellister will be happy with this release, although it might end a bit too fast. But you can always put it on again!