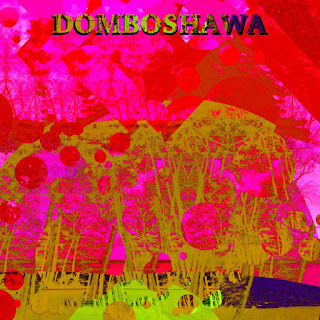 Named after a hill with ancient rock art in Zimbabwe, Domboshawa is a solo project by Swedish multi-instrumentalist Anders Broström.  This is the third physical album by this project if you count the limited debut cassette Dark Lights that I unfortunately don't have. There are also several digital only releases on the Domboshawa Bandcamp site. I fell in love with last year's Mind Electrix LP also on Drone Rock, and this new one is even better.

Anders makes psychedelic, experimental and instrumental space/stoner rock, that varies from heavy, hypnotic rock jams to more ambient,  beautiful, dreamy and floating soundscapes. I think at least most of it is first improvised and then of course overdubbed. On this album he uses at least electric guitars with an (un)healthy amount of effect pedals, bass, drums, synthesizers and organ on his sonic wizardry. There are seven long tracks on the album. "Explorer" is mind-melting heavy stoner/space rock jam with spacey sound effects and a lighter, weird and spaced-out middle part. If you like continuous, fuzzy acid solo guitar work you'll enjoy this for sure! On "Azores" the jamming and guitar soloing continues but now with a more The Bevis Frond like backing also including organ. Very cool! With "Blå Lotus" Anders gives us an opportunity to close our eyes, dream and fly to a distant, magical place. "Safe Flight" is heavier, hypnotic stoner stuff again. The longest track on the album is "Yellow Dots" at almost 19 minutes. It starts off slowly and minimally and stays very experimental and weird. Very trippy stuff on this one! The dreamy and heady "Röd October" is similar in vibe and doesn't really start to rock out at any point. Nice! The album is finished with "Krystal Händs" and it's another ultra-trippy, slow mind-exploder that is pretty ambient and experimental at first but gets heavier and more coherent and intense towards the end. All in all, this is an amazing, psychedelic experience as a whole and keeps the listener surprisingly well intoxicated and interested for the long journey into the center of the mind.

This is the first double vinyl release on the amazing Drone Rock Records and on bright orange and bright pink coloured LP's that suit the beautiful, psychedelic open gatefold cover art perfectly. Beyond Vibrations is limited to just 250 copies so act fast if you fancy a copy! Warmly recommended for all psychonauts. There are still some copies available directly from the label.