The Spacious Mind - The Drifter 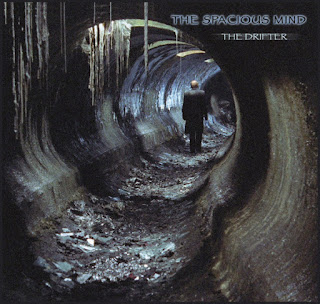 I was really looking forward to play Jönköping Space & Rock Festival in Sweden in 1997 with my band Dark Sun. Okay, there were legendary Welsh rockers Man who were very cool to hang with,  my idol Nik Turner who we had already met and played with the previous year at Hamburg Hawkfan meeting and lots of great space rock bands like Darxtrar... But then there was The Spacious Mind! They had already released five albums by the time and were absolutely one of my favourite bands, they still are. Somehow these psychonauts from the middle of Northern Sweden had came up with a totally unique psychedelic rock style that really amazed me. Their music has a strange, dreamy quality and you were immediately transported into totally different space and time. Sure, they had their West-Coast/psych/space/kraut/acid/rock and folk influences, but they also had something out of this world. It was nice to meet these quiet, a bit shy and spaced-out guys (and also help them look for their van keys all over the festival site after the festival...). Their gig (feat. Nik Turner, like most of the other bands there as well!) was pure magic. We kept in touch and I was also introduced to their other myriad projects and bands as years went by. Of course we also invited them to play in Helsinki with Dark Sun, Circle and others in 2002 which is story of its own.

Anyway, during the recent years there has not been that much TSM activity. Gentle Path Highway was released on CD on their own Goddamn I'm A Countryman Records in 2007, and then I thought that was it. I was pleasantly surprised when Greazy Green And Stoney Lonesomes Vol.1, an excellent new album, was released in 2014 on Kommun 2. If you don't count Sleepy Eyes And Butterflies 2LP, their first vinyl outing including two side-long tracks from the first CD with three new ones and put out in 1995 by Gates of Dawn in the U.S., there were no TSM compilations available. This is where Trail Records came to picture wanting to make one. The Drifter is a 62-minute CD comprising of six tracks from various sources. All of them have been previously released, but you'd have to be one of the lucky 50 true fans like myself to own the limited live CD-R two of the tunes are lifted.

The fifteen-minute "The Drifter" that starts off the disc was originally the A side of their sole 10" release Reality D Blipcrotch in 2002. I just love this track! The first half is hypnotic, instrumental stuff that speeds up and gets more intense until the beautiful, dreamy and slow end part with soft vocals begins after the spacey middle. The extensive use of ebow and organ are perhaps the most characteristic sides of this band. The long instrumental "Euphoria, Euphoria" is another favourite of mine from The Spacious Mind catalogue: it rocks in its completely own universe but you can still totally fly along. Wonderful! "The Players In The Band" (the B-side of Reality D Blipcrotch) is a pleasant example of a softer, more folky but still totally spaced-out side of TSM. "Floatin' Down The River Whistlin' On A Tune" is taken from the Various Artists CD Copenhagen Space Rock Festival 2002 (other artists are Dark Sun, Darxtar, Gas Giant, Mantric Muse and Pseudo Sun). This festival sadly never happaned, but I'm glad that the CD still exists. This track is a slow instrumental jam that has some pretty weird, experimental and trippy stuff going on... Some people have been complaining that the CD also includes a live version of "The Drifter". I personally don's have any problem with that, since this is a pretty different, faster version and after all, that's the title of the compilation. These guys always left quite a lot room to improvisation, so none of the tracks were played the same way twice. This version misses the slow ending with vocals. The CD is finished with another live cut "Spirit Roots" that has never been released as a studio version. For some reason, on this release the 20-minute track was edited for a 10-minute version, but it works great as it is.

It was a hard, if not even totally impossible, task to try to put the essence of this rather prolific band with some very long tracks into just one CD. What this band really needs is a CD box set as well as all their CD-only albums reissued on vinyl! Having said that, I do think that Trail Records did a great job combining some of their best tunes on this CD and making them available to the public again. I'm sure there is a whole new generation of spaceheads who have not yet experienced the mind-expanding qualities of this amazing band, and now is their chance. Enjoy the euphoria!