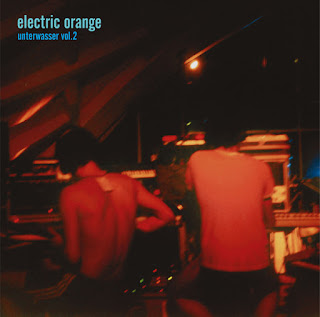 Right after the Vol. 1 I reviewed a couple of weeks ago here comes the second volume of this electronic live gig by Electric Orange in duo format. The long gig was originally released on very limited double CD-R in 2002 and this is the first vinyl outing. This limited 2LP includes six long tracks in 80 minutes. Dirk Jan Müller is playing synthesizer, organ and tape and Dirk Bittner electric guitar, synthesizer, drum machine, vocoder and voice.

Vol. 2 starts off with the massive, 19-minute-long, hypnotic, mystical and trance-inducing "Ortat". It has cool, sort of tribal beat and makes you want to dance. Very nice! On the side two we first have the  more ambient and highly psychedelic "Span" that tingles just the right spots in your back brain. "Lake" has some cool electronic beat again as well as vocals and mesmerizing sequencers as well as some more experimental stuff. "Hydrok" is a seventeen-minute krautrock masterpiece that is probaböy my favourite on the album! Think of Neu! and Tangerine Dream mixed together with some modern electro influences thrown in. Trippy! "Quiet Party" is a slower, more ambient jam again, and "MK" finishes the album in cosmic, celestial atmospheres. Another excellent Electric Orange release, what else can I say! Available on limited red/black marbled and red splattered editions from the Adansonia website.