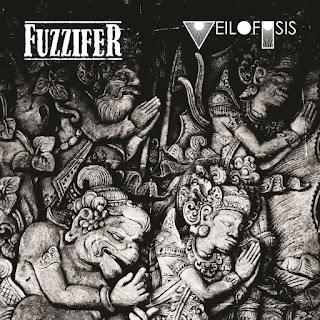 Okay, this time I might be later with my review than for sometime since this split 12" EP was already released in April 2017... But I did receive it a bit late as well and totally accidentally (or was it predestined?!). Anyway, Fuzzifer is a Helsinki-based experimental and psychedelic occult/doom/noise/black metal outfit with four bass players that I've been aware of for years but not really got into or properly checked out even. They have released one limited live tape called Square Wave Godhead, Soap Bubbles And Goat Head before this split EP. Veil of Isis is even more obscure and I can't really find much info on them. Very mysterious indeed...

"Lepus Infernalis" by Fuzzifer on side A is slow, doomy, harsh and crushingly heavy track with tons of ultra distorted bass, drums and weird, experimental analogue synth sounds. The "vocals" are growled in the black metal style and also very manipulated. At times the piece cools down for a bit and you can hear more melodies, but mostly it's just simple doom metal styled riffing and ear-splitting noise for over eleven minutes. I have not heard anything else quite like this and I got to say its pretty scary and impressive! The Veil of Isis track has a slow, quieter beginning but don't let that fool you. This one also turns into experimental noise feast even though the slow drum beat stays in the background. In the end it's all peaceful again.

The digital download also includes five joint jams featuring both bands as Fuzzy Veil of Isifer and these are actually rather enjoyable! "The Outsourced Executive Agents of the Black Arts" in particular is very tasty, although chaotic and noisy psych jam. "Starship Satan" is a darker affair and very heavy as well. This will fry your brains! The hilariously named "Sniffing Glue From Various Orifices at the Tar Pits of Sodom" continues along the same (left hand) path. "Flying Pillows of Seething Hatred" is an almost 15-minute, gloomy chaos-monger getting totally noisy by the end and "ICH LIKE IKE" very noisy black metal stuff. Phew! This music is definitely for the faint-hearted but if you are looking for extreme experimental dark noise doom, look no further. You can experience Fuzzifer live on the 14th ot November at Semifinal, Helsinki.