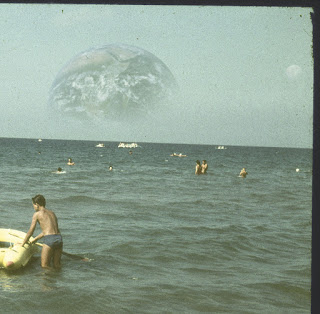 Pavallion is a new progressive, slightly psychedelic modern post-rock band formed by four young guys from Krefeld, Germany. They released their debut album 2048 by themselves last year on vinyl (!). This is their second album (also on limited vinyl, yellow 150 / green 350 copies) and continues on the atmospheric, melancholic style already present in 2017. The tracks and production is better now, I must add. Using just guitars, bass, drums and great, soft, melodic and emotional vocals the band creates very nice, dreamy and cinematic musical states the listener can easily be hooked on.

Stratospheria  has just three tracks. The opener "Waves" is a beautiful, tranquil piece that caresses your soul with emotion and brilliance. Things get a bit heavier later on and I'm actually reminded of some of the stuff that Riverside does. I'd say Pavallion is definitely closer to modern progressive rock than space/kraut/psych/stoner rock with their pretty melodies and emotional vibes. And nothing wrong with that, I enjoy this album very much! Just don't expect mind-melting psychedelia here. What a great opener, anyway. The very slow "Monolith" is a much darker piece and the shortest track on the album at 5:10. It only has low toned narration and no vocals and a pretty spooky vibe, phew! On the B-side we've got the over 24-minute title track "Stratospheria" and it's a real progressive post-rock masterpiece. Starting off very slowly and peacefully the track lures you into a dreamy slumber and when the beautiful vocals join in you are in awe. This works perfectly with headphones and your eyes closed. Wonderful journey! Around the 16-minute marker there is some hypnotic, heavier guitar stuff and then some more progressive, more intense parts that I enjoy very much. Towards the end they return to the beautiful stratospheres of the beginning, very nice. This is a must-have for all lovers of great, emotional progressive post-rock!