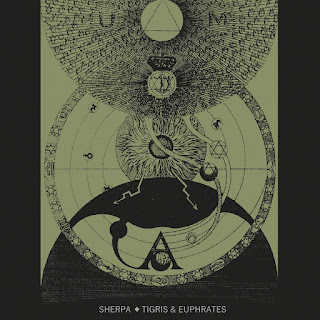 Tigris & Euphrates is the second album by Italian band Sherpa. Their debut album Tanzlinde was released two years ago also on Sulatron and you can find my review over here. Personally I don't find the band's music that psychedelic or mind-expanding, but they often have a very pleasant, emotional and beautiful vibe. This new album is even more atmospheric and tranquil than the first and is well-suited for dreamy Autumnal and Wintry moods.

The opener "Kim (((o)))" sets the mode for the album. It is still one of the most intense and powerful tracks on it, but still works best with your eyes closed. I really like the vocals and guitars and the hypnotic vibe when the track slowly builds up towards the end a bit like post-rock usually does. "Creatures From Ur" is a very slow, peaceful and soft piece that gently makes you float, and "Equiseto" continues in similar paths. Also "AbscentTo The Mother Language" on side B is beautiful, atmospheric and dreamy post-rock until it gets a bit heavier after the four-minute-marker. Apparently language and it's importance to the evolution of human kind is the main lyrical theme on the album. Rather interesting! The first half of "Overwhelmed (Def Version)" is a bit more experimental but also more mesmerizing and chilled-out than the rest of the album. The end part has more structure and beat and a nice, ethnic folk rock touch. The album is finished with the almost eight-minute "Descent Of Inanna To The Underworld" that is another slow, atmospheric masterpiece that also gets more intense and heavy. Maybe my favourite? This album is released on limited vinyl and CD so get it while you can!