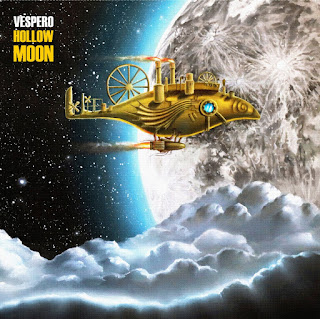 Vespero from Astrakhan is one of Russian's best bands ever. I've been a follower since I received their 2007 album Rito from R.A.I.G in 2007 and they have never let me down. Except that we still haven't been able to get them to play in Finland, but that's another story... The band has been pretty active and productive all their career putting out around one release a year since 2004. Their adventurous instrumental music has elements of prog/post/space/psych and krautrock, electronic and ambient music and lately even more jazz and also classical influences, so you never know where they are going and you won't get bored on the journey. Only some of their numerous albums have been released on vinyl which is a shame. For vinyl enthusiasts I would recommend their 2012 krautrock masterpiece Subkraut: U-Boats Willkommen Hierand their first Tonzonen LP, the trance-inducing Shum-Shir (2017).

On Hollow Moon the band takes us on a fantastic trip to the moon. The album theme is inspired by a story The Man in the Moone by an early English sci-fi writer, historian and bishop Francis Godwin (1562–1633). This voyage of utopian discovery is a perfect back-bone to Vespero's wonderful music. "Watching The Moon Rise" is a spacey, ambient intro. "Flight of the Lieutenant" is a fast and progressive piece that takes us to the moon. The violin and saxophone enhance the jazzy mood, but there's a lot of happening on this one. "Sublunarian" is a bit more laid-back and reminds me of some of the mid-seventies Jean-Luc Ponty albums. Definitely strong jazz-fusion vibes here, but with a modern touch and sound. "Moon-Trovants" is a cool progressive space rock track and one of my favorites. I really like this one! On "Mare Ingenii" the band cools down for three minutes and "Feast of Selenites" is an eleven-minute psychedelic, jazzy space trip that makes you feel dizzy in the head. Wow! "Watershed Point" offers two minutes of tranquil ambience and on "Tardigrada's Milk" the band goes into symphonic post-rock territories with some world/folk music vibes stacked in towards the end. All in a progressive way, of course. One of the highlights is "Space Clipper`s Wreckage", a progressive and psychy track with cool lead guitar/violin work, weird rhythms and spacey synthesizers. The playing skills of these guys are just amazing. The album is finished with the symphonic outro "Watching the Earth Rise" and you are in awe by now for sure. What a wondrous journey this has been! Make yourself a favor and check out this magnificent album released today. Available on limited vinyl and CD.