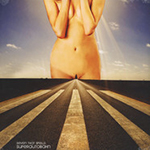 Seven That Spells is a Croatian band that started out over ten years ago a bit in the stoner rock vein but soon got weirder and more experimental when they discovered Acid Mothers Temple and played and collaborated with them for a while. AMT have definitely been a big influence lately, but STS still have gone deeper into a direction of their own. They flirt with krautrock a lot, but in reality they make much more noise that ten kraut bands put together! Their sound can usually be described as a psychedelic, hypnotic and chaotic wall of sound. Their progressive/regressive music is usually mostly instrumental with just some mantra-like chanting and stuff like that. This particular album is their eleventh and originally released on CD in 2012 and now sees a limited vinyl release on Sulatron. Kawabata Makoto from AMT is playing some freaky electric guitar like only he can, and there is also some sax and even piano on the album, but mostly just guitar, bass and drums.

There are three long tracks on the album. The first two have been edited for this vinyl issue. "The Wall" starts off with some complex, energetic poly-rhythms and chanting.  Later on some chaotic guitar terror is added on top to a create effect. "Pyramid" sounds at first a bit like 90s King Crimson, but has lots of wild, noisy guitar on it too. "The Colossus" is the longest track at 21:43 and perhaps the most pleasant to the ears, although the guys really start to freak-out towards the end... Some free jazz vibes in there as well, I guess. The last minutes are very peaceful, thank God! This album will remove the wax from your ears and blow your mind, guaranteed.