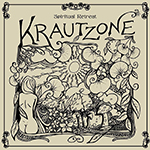 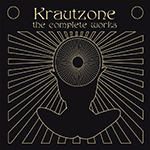 These are the last two releases by this great, spontaneous kosmische krautrock band that was formed accidentally in 2011 by German space/psych/kraut/rock luminaries that also play in bands like Electric Moon, Pancakes, Zone Six etc. Spiritual Retreat was actually their first improvised recording in 2011 but mixed and released this year after one full-length album and one split LP with the amazing Lamp of the Universe. This new/old album was released only on vinyl and limited to "777  divine copies". The album is comprised of just one massive, spacey and trance-inducing jam lasting for almost 44 minutes and just divided into two parts for the vinyl. The sound quality is perhaps not the best possible, since the recording was not absolutely hi-fi in every way, but this still sounds very good after the mixing and mastering. What's more important is the totally out-of-this-world vibe this album offers... It most definitely takes you someplace else! This is very hypnotic, cosmic, tribal, psychedelic and rather laid-back stuff reminding me of some of the more ethereal and spacey krautrock legends of the past like Amon Düül II, Ash Ra Temple etc. and I just love it! The instrumental, wholly improvised music is made with synths, drums, bass, guitar and organ, and that's all you need for a brilliant mind-journey. A must-have for all collectors of cosmic vinyl candy for sure.

For those of you who don't own a vinyl player or just are on a strict budget or something but still want to play some superb kosmische music The Complete Works 2CD is like heaven-sent. As the title suggest, this release includes all the band's works in one jewel case. First, we've got the three long tracks from Kosmische Rituale, a limited coloured vinyl release that I have previously reviewed here. Even if you are lucky enough to have all the Krautzone vinyl, this double CD is worth buying for the previously unreleased, celestial bonus track "Schwebung" that ends the first disc! On the second disc, there are first "Superkraut I" & "Superkraut II", the both long Krautzone tracks from their marvelous split LP with Lamp of the Universe that I have also already reviewed here. Then there is "Spiritual Retreat" as one, very long and trippy track... Whoaah! Just put this 2CD on if you want to float in space for about two hours! It comes with a very nice booklet with album art and info. Warmly recommended.