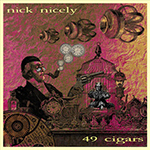 Fruits de Mer really are great binding with many of my biggest underground psych heros of the last few decades... nick nicely started his career by releasing a couple of great psych pop singles in the early 80s before disappearing into obscurity for years. "49 Cigars" was originally released as the B-side to "Hilly Fields (1892)" in 1982. This strange and mesmerizing single was called "the best psych single since the 60s" by NME and I think they were pretty much right. This four-track EP, second for Fruits de Mer by nick, compiles together the original version with a very different, freaky and jammy, extended live version of the same song, a recent, trippy remix of "Belinda" from nick's latest album Space of a Second and, from the same album, the weird and wonderful "Lobster Dobbs" that of course was destined to be released on Fruits de Mer due to its marine title... Well, I love everything this guy has ever done, so it's obvious I also really enjoy this limited edition 7"! Somehow nick's music has a highly hallucinogenic, otherwordly and warped-out nature of its own still maintaining some elements of melodic psych pop, rock and even experimental electronica. This little EP is enough to transport you into another dimension, so let's see what his next album will do... Highly recommended!