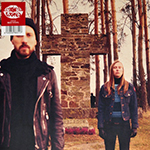 I've been aware of this Finnish doom metal band since their first demo The Witch Comes Back to Life in 2004, but haven't really followed them actively. It was a big surprise to me that they sounded really different late this summer when I saw the trio in Turku. Sure, there were some heavy, slow and doomy stuff in there as well, but the set started with lots of high-energy psych rock instrumental jamming in the vein of  Earthless etc.! I really enjoyed their gig, and that reminded me that I had received a digital promo kit of their latest album from Svart Records earlier this year... I've been so busy that most of the promo downloads are just laying around in cyber space and completely forgotten, sorry about that. Anyway, I downloaded the album and will write a short review now, even if I'm way too late.

The new album includes just four tracks, but the fourth one takes the whole side B of the vinyl version. The opener "Fleeting Are the Days of Men" is the shortest track at 5:35 and maybe closer to their old style being quite slow and doomy. There are melodic harmony vocals which I almost always prefer over harsher screaming etc. even in doom metal. Somehow the riffing reminds me of The Obsessed or Revelation having some progressive elements as well. The track turns seamlessly into toe more peaceful "Summer's Isle". In the middle the track speeds up a bit and we get some jamming and guitar soloing as well, great! "Desertshore" is at first slower stuff again, but starts to rock out more later on. Then it's time for the almost 20-minute "The Sleeper, including Being Is More than Life" that begins with some church bells and bird-song. This is a very atmospheric and pretty laid-back track with some more melodic harmony vocals at times and it also gets more jam-oriented and also psychedelic... This is a great album, but not quite as exciting or nearly as energetic as they were live last month. Somehow I feel the guys don't really know where they want to go at times, so they just sort of linger on. I must say I'm really looking forward to their next album since the new stuff is excellent!