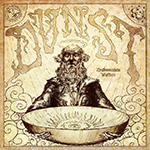 This is the second album by German psychedelic stoner rock heads Dunst. The members also have other interesting projects like Vintage Cucumber and Weedruid, so check them out too. Archimedes Waffen was released on vinyl last year, but is now also available on CD. The album features seven long, instrumental, atmospheric and adventurous tracks of great progressive, psychedelic stoner rock in the vain of Colour Haze, Samsara Blues Experiment, My Sleeping Karma (just listen to the first two tracks) etc. Some of the more mysterious, mesmerizing tracks, especially the excellent "Dhimahi Prachodayat" and "Agathe & Saturnia" also bring to mind the first album by Liquid Sound Company. The album was recorded in Berlin in 2011 and features mostly just guitar, bass and drums, but one guy is listed on vocals and effects as well. I can hear some sound effects/keyboards, but no actual vocals. "Hammerhigh" is one of the most energetic tracks and reminds me of Karma to Burn. This is very enjoyable stuff and a great album as a whole, also what comes to production. I like the way these guys play, and they have good taste in music style, so why don't you have a listen as well!