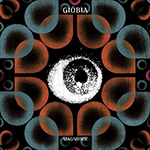 Italian psych rock band Giöbia has gone into heavier and darker direction on their new masterpiece album Magnifier. I really enjoyed their previous full-length Introducing Night Sound that was released on vinyl and CD by Sulatron Records in 2013 and also have their one 7" EP but I have not heard any of the CD-only releases. They used to be more psychedelic garage rock oriented, but especially on this new album they get into heavy psych and space rock with a blast.

The first track "This World Was Being Watched Closely" uses cool sampled narration in a clever way. The music is hypnotic, psychedelic and rather heavy too, and starts to rock more in the Hawkwind style after a couple of minutes. Great! "The Pond" is another killer, fuzzy heavy psych track sounding a bit like The Cult of Dom Keller. "The Stain" is slower stuff with more keyboards and organ but its also very powerful and pretty heavy and gets faster later on. I'm loving it! "Lentemente la Luce Svanirà" is a hyper hypnotic and dark track bringing to mind bands like Dead Skeletons, wow... "Devil's Howl" is the shortest track at 3:12 and possibly also the heaviest with some stoner rock vibe. "Sun Spectre" is the longest piece of the album and lasts for 15 minutes... This is very trippy and experimental stuff including long, groovy and hypnotic parts that force you to dance in ecstatic trance as well as some floating, ambient passages. The album is finished with the title track "The Magnifier" that is a great, more traditionally constructed, melodic psych rock song not that far away from the vibe of Vibravoid. What an excellent album with no fillers, absolutely one of the best albums this year! This really is pure psychedelic dynamite and every fan of heavy, spacey psych rock should get a copy.